Mylio Photos’ Photo DeDupe tool helps you clean up unwanted duplicate photos from your media library. It starts by scanning your entire Mylio Photos Library and will generate a list of files where it detects two or more copies of the same media. 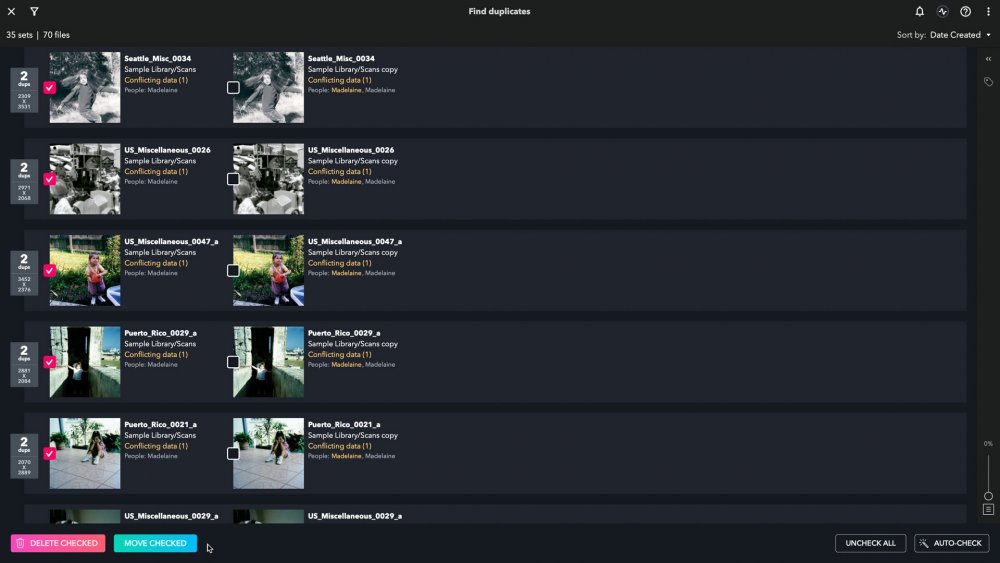 How does Photo DeDupe work?

When you invoke Photo Ded]Dupe, Mylio Photos uses existing information in your catalog to quickly identify specific criteria and determine if files are unique. If any of the following conditions are met, Mylio Photos will mark it as a duplicate:

It is important to note that Mylio Photos will only detect exact matches. For instance, different sizes or resolutions or visually similar images such as a burst of shots that are nearly identical, will not be marked as duplicates.

The Photo DeDupe tool allows you to merge metadata when removing or deleting duplicates. When Delete Checked or Move Checked is clicked, you’ll have the option to Merge moved image metadata into the remaining duplicate file(s). This allows you to retain important information you may have added about your photos such as IPTC copyright, keywords, title, caption, and more.

When a photo set has conflicting metadata, each metadata field with information will be listed next to each version of the photo. When an image is marked as Checked for removal or deletion, all metadata fields that are present on that file, and missing on the remaining image will be shown next to the remaining image, highlighted in yellow allowing you to preview the merged metadata result.

Some metadata fields can hold a single value, such as a Title, while others can hold multiple values, such as keywords.

Hi Albert - Once you’ve marked your photos as duplicates that you’d like to get rid of, you’ll need to click the button at the bottom of the Photo DeDupe screen to either “Delete Checked” or “Move Checked”. Here is some additional information: https://manual.mylio.com/22.1/en/topic/removing-vs-deleting-duplicate-images

I put a check mark on duplicates delete them but why are they still there after closing App and restarting. Mylio finds the same duplicates. I am glad I didn't do all of them I just tried a few.