Import a Google Photos Library
Import From Photos for macOS 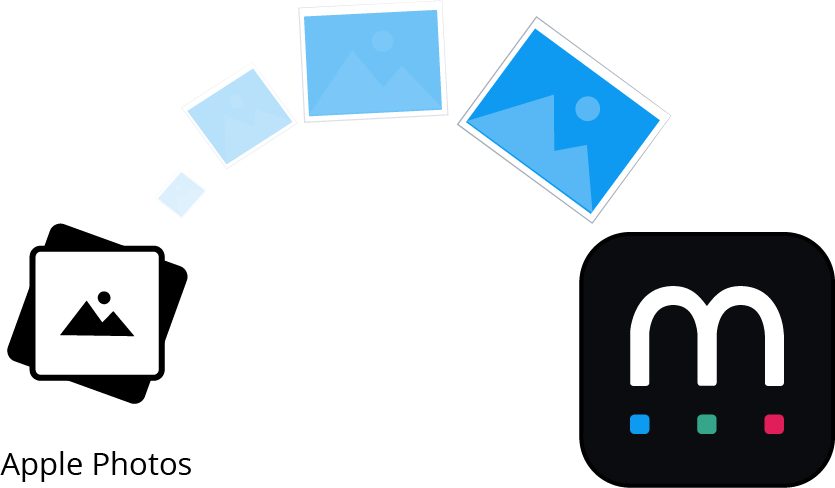 Importing photos from Apple Photos, or a legacy iPhoto or Aperture library, is a quick and easy way to populate your Mylio Photos Library with some of your favorite photos.

If you add another device that shares that iCloud Photo Library account, Mylio Photos will only add media that has not yet been synced with Mylio Photos, preventing duplicate images in your library.

*TIP: By default, media from all devices using the iCloud Photo Library will be shown in one Folder (Apple Photos). If you want to view media from each device separately (e.g., in subfolders for iPhone, MacBook, etc.), open the Apple Photos folder, then choose Show as Container from the More menu.

Media imports from the iCloud Photo Library are one-way. This means that once media has been imported into Mylio Photos, any changes made to those images will only be visible from the app where the change was made. Here are examples:

*TIP: If you’re running out of storage space on your iPhone or iPad, we highly recommend using Mylio Photos’ built-in tool to free up space on your device. Prior to deleting any photos from your camera roll, the app will verify that the images have been backed up and are protected in Mylio Photos, so you don’t lose any precious memories.

!NOTE: Mylio Photos (version 22.0) includes a major improvement in the way iCloud Photo Libraries are handled. If you’re upgrading from an older version of the application, please click here for instructions.

Some files from an Apple Photos library or iOS Camera Roll (Portrait, slow-mo, Live Photos, etc.) may be imported with a .myb (Mylio Bundle) file extension to allow Mylio Photos to properly sync these unique file types. The following effects from Apple Photos are supported:

!WARNING: .MYB files should not be edited, moved, or deleted in your filesystem. Doing so can result in data loss.

Import a Google Photos Library
Import From Photos for macOS