Adding face tags to photos of friends and family in Mylio Photos is simple. Mylio Photos’ face recognition scans your photos for images with people and catalogs when a face is detected. When you enable the Face Tagging button the app will highlight the recognized face with a circle, and ask you to identify the person. As you tag people in photos, the app will learn specific faces and match untagged faces with previously identified people. 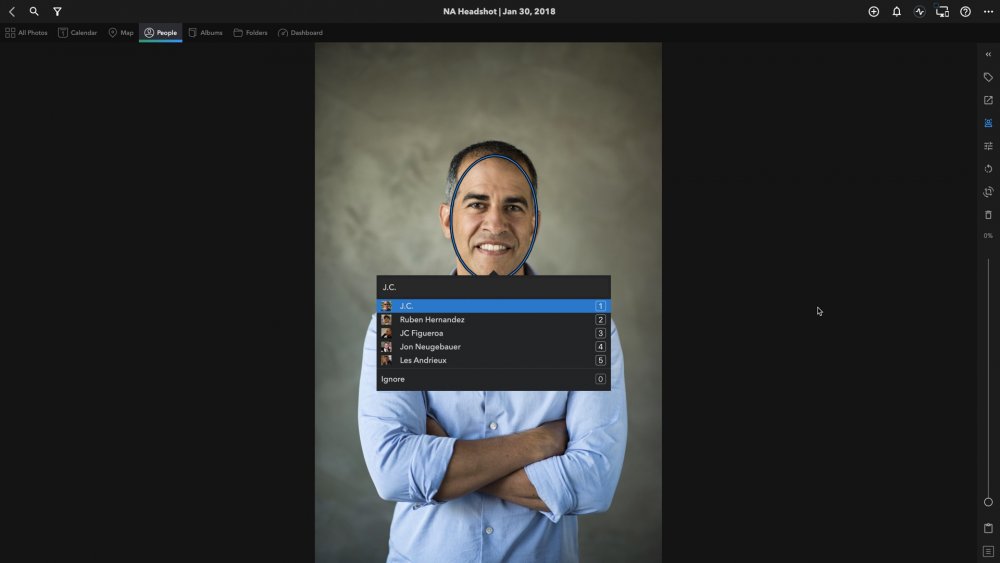 Batch Tagging – Mylio Photos automatically groups similar photos, and makes it easy to tag multiple photos at once with the Batch Tagging tool.

Auto Tag – Once you’ve tagged several photos of a person, Mylio Photos will automatically add those images to the smart collection for that person. When reviewing their collection, you will have the option to Approve, Reject, or rename any automatically added face tags.

Approve – Mylio Photos may suggest a previously named person who appears to match the person in the photo. Choosing Approve will confirm the suggestion.

Reject – Mylio Photos may suggest a previously named person who appears to match the person in the photo. Choosing Reject will dismiss the suggestion, and allow you to select a different name or enter a new name at a later time.

Ignore – Mylio Photos automatically detects faces in photos. If you prefer to leave a person untagged and unnamed, select Ignore. You will no longer be prompted to name and tag any ignored faces in an image.

Skip – When using Batch Tagging, Mylio Photos groups photos that are likely the same person. Choosing Skip will jump to the next grouping and allow you to return to the skipped collection later.

Rescan Faces – If one or more faces in an image were accidentally Ignored, choose Rescan Faces from the Quick Action menu. This will prompt Mylio Photos to rescan the image for untagged faces and allow you to add face tags to untagged people.

Known People – Expand the People section of the Info panel to reveal information about the faces tagged in a photo. Known People shows, at-a-glance, who has been tagged in a specific image or group of images.

Untagged – The Untagged collection in People view is a grouping of all images with detected faces that have not yet been named and tagged.